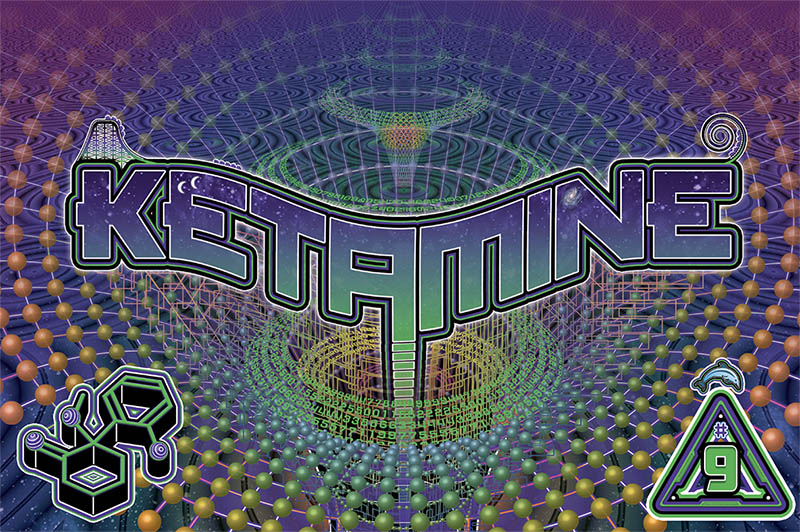 Morris reagent, when used properly, can reliably differentiate ketamine from other dissociatives.

Colorimetric reagents (chemicals that change colors in the presence of certain drugs) are in many ways the bottom rung of the drug checking ladder. Compared to Infrared Spectroscopy or GCMS, they provide limited information. For example, they cannot tell you if your drug sample is pure – just because you get the color change you’re looking for with one reagent doesn’t mean that another drug isn’t also present in the sample (perhaps one that doesn’t change color at all). Also, reagent tests can only ever be considered presumptive, since there is always a chance (no matter how small) that there exists another drug (perhaps a new research chemical) that produces the same color reaction as the drug you’re expecting.

Some of these challenges can be mitigated by using multiple reagents on your sample (which is why our MDMA testing kit contains three), or by adding immunoassay tests into the mix (like fentanyl test strips). But since the better technologies remain cost-prohibitive for most drug consumers, the problem still persists.

This is why discovering a new reagent that greatly enhances the field of drug checking is a rare and momentous occurrence, and it is why our development of Morris reagent is so significant. For a new reagent to be useful for harm reduction purposes it must, at a minimum, fill a useful void (like Froehde reagent being able to distinguish between MDMA and 5-MAPB). For it to be very useful, it should fill a big void. And Morris reagent does just this.

Why is Morris reagent so useful?

Before Morris reagent, there simply did not exist a reagent (or immunoassay strip) that could identify ketamine with a high degree of reliability. Mandelin reagent has been the recommended reagent for ketamine testing, but Mandelin is inconsistent (especially when the ketamine has been diluted with inert cutting agents), and it has a short shelf life. The liquid becomes cloudy a few weeks after being manufactured, which makes it difficult to discern the color changes. I can’t count the number of times that I have had to say, “I really don’t know. It could be ketamine, but I’m not sure” to someone who brought us a sample to test at the DanceSafe booth. Even when the reaction is clear, we always have to warn the person that it could be a ketamine analogue or another novel dissociative, many of which produce false positives. Similarly, ketamine immunoassay strips on the market today also produce false positives with many other dissociatives.

Morris reagent solves both these problems. Not only does it appear to have an exceedingly long shelf life, but it does not produce false positives with any of the most common novel dissociatives on the market. We tested it on a dozen dissociatives at our partner laboratory at UCSF, as well as on many field samples (that we subsequently confirmed with GCMS). Morris reagent, for whatever reason, is highly specific to ketamine. Nothing else produces that vibrant purple color besides ketamine. As an added bonus, it also produces a unique color for the two currently most common ketamine analogs, DCK and 2-FDCK, both of which turn a dark, muted blue. All the other dissociatives (and nearly all the other drugs we tested as well) turned dull green.

How did we develop Morris reagent?

We did not discover Morris reagent. A chemist named Jeremiah Morris invented it in 2007 (hence the name); we just developed it as a harm reduction tool. We regularly scour the scientific literature for leads into possible new reagents, and when we find something that looks promising we manufacture it and test it. Most of the time the reagent ends up useless for harm reduction purposes. Either it has too short a shelf life, or it produces too many false positives or ambiguous color reactions. But occasionally we land on something that works. In 2015, for example, I discovered Folin reagent, which can fairly reliably identify a class of drugs known as piperazines. In the case of Morris reagent, it was our current Executive Director, Mitchell Gomez, who forwarded me a scientific paper that eventually led to our successful development.

Before I explain the peculiar stirring process necessary for Morris reagent to work, it’s important that I discuss Morris’ precursor, the notorious (and perhaps scandalous) reagent called Scott’s.

But Morris reagent, in yet another surprise, fixes the cocaine problem as well. Our tests have confirmed that Morris reagent turns a unique, bright blue color in the presence of cocaine, similar to the Jolly Rancher hard candy. No other drug we tested produced a color even remotely like this (again, nearly everything turned dull green).

How to use Morris reagent – stirring is key

Morris reagent is a two bottle, two-liquid reagent. You place a drop of liquid from each bottle onto a small amount of the drug sample, then stir it with a pointed object (such as a toothpick or the sharp point of a knife) for 20-30 seconds. It’s the drop from the second bottle, combined with stirring, that does the trick of eliminating the false positives produced by Scott’s reagent. The need to stir may be the reason nobody discovered its usefulness until now.

With other reagents, you just put a drop of the liquid on the drug sample and watch the color change. This works because most reagents contain acids that break down molecules through a chemical reaction that dissolves and destroys the drug instantly, producing a color change based on the new molecules formed. Morris reagent does not do this; rather, the reagent simply comes in contact with the present molecules, changing color without dissolving or destroying the drug.

In our lab study and field tests, nearly every drug we tested turned blue after the first drop. This was expected because – remember – the first bottle is basically Scott’s reagent. It was only after adding a drop from the second bottle and stirring that the final color was produced. After doing this, nearly everything that turned blue from the first drop shifted to green. Ketamine turned bright purple. Two ketamine analogs (DCK and 2-FDCK) turned dark blue/gray. And cocaine turned Jolly Rancher blue.

Ketamine is one of the most popular recreational drugs in the world, and over the last decade it has also been discovered to be an effective treatment for depression. Ketamine clinics have opened in cities across the US (and the world) offering one infusion for anywhere from $300 to upwards of $1,000. Between recreational users and those seeking to treat their depression but who cannot afford the cost, millions of people around the world are purchasing ketamine on the illicit market every week, a market that is unregulated and becoming more and more adulterated as demand for ketamine grows. We are confident that this new reagent, if used properly, will allow people who choose to purchase illicit ketamine to avoid the increasingly prevalent counterfeit drugs on the market.

(We have also added Morris reagent to our cocaine testing kit, as a first step before using Marquis and Liebermann reagents.)