Android Jones has once again stepped up to support DanceSafe, by allowing us to produce his first ever signed blotter art. These prints look incredible in person, pictures just don’t do them justice! Limited to just 200 prints, these will no doubt be incredibly desired collectors items for many, many years to come.

Lyons, Colorado-born Independent Artist Android Jones began studying art at age 8. He attended the Ringling School of Art and Design in Sarasota FL, where he trained in traditional academic drawing/painting and animation. Jones interned at George Lucas’ Industrial Light and Magic and later founded Massive Black, an art development company based in LA. Android began his career as an Independent Artist in 2005. He now lives in his home town of Lyons, maintaining a large art studio in a repurposed barn.

Best described as a “digital painter,” Jones has created an immense body of work. He has become well known for his many layered, psychedelic works and live performances using a custom built digital set up. He participated in the Grateful Dead Fare Thee Well Tour and his work has been projected on the Sydney Opera House and the Empire State Building. A long time member of the Burning Man community, Android has traveled the world exhibiting his work and has contributed to events on 6 continents.

At the center of Jones’ work is spirituality and altered states of consciousness. Describing his work as Electro-Mineralism, Jones attributes his ability to create to the wonders of technology, crediting the planet’s resources for advancements in art production. Manipulating light and energy, Android Jones captures complex concepts while utilizing his formal background in the arts. Described as a digital alchemist, he is determined to alter the viewer’s perception, pushing the boundaries of the imagination through the use of innovative media forms. 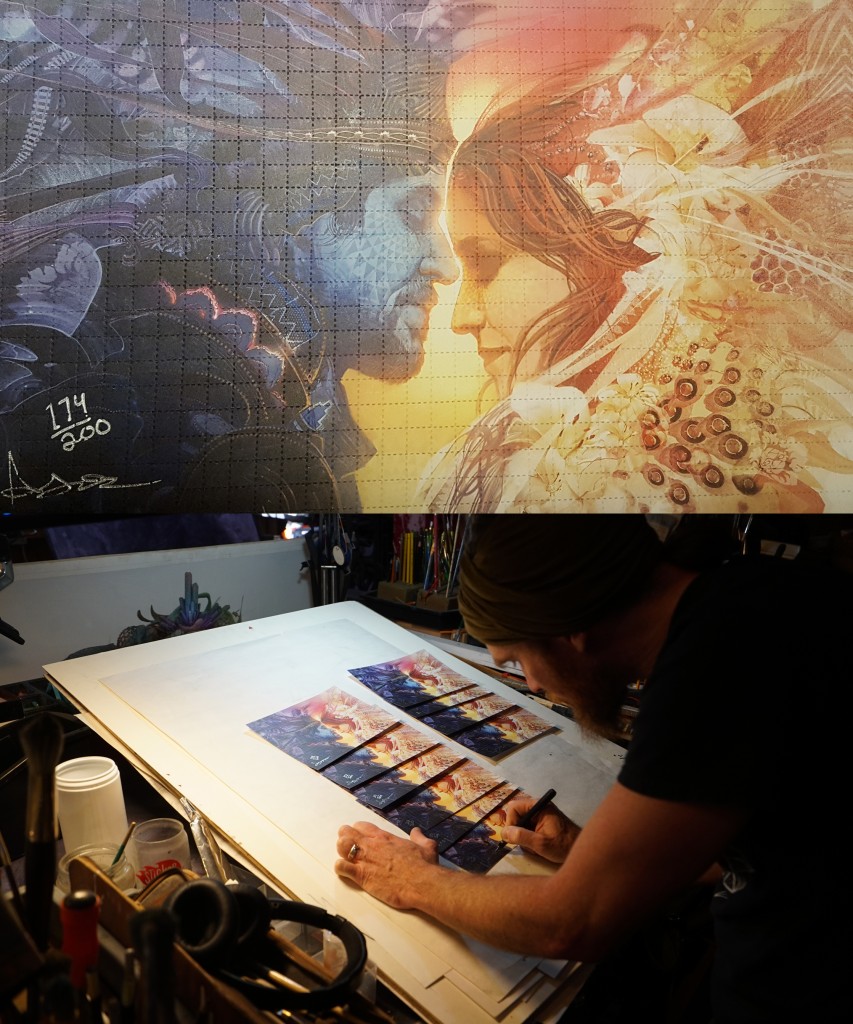 Blotter Art is one of Underground America’s most important (and misunderstood) forms of folk art! Blotter Art started out as the artwork that individuals used to drop liquid LSD onto so that they may easily sell the drug. After some time, art lovers began to understand the value of this artform and collect and preserve the unsaturated artwork. Since then, Blotter Art has become the “eclectic” choice in art.

The original collector and scene maker of blotter art is Mark McCloud, a San Francisco artist and former art professor. His collection started over 30 years ago. Today, he has over 400 framed prints and thousands of unframed sheets, constituting the largest collection of blotter art in the world.

Through Mark McCloud, blotter art was promoted at galleries and exhibits, earning him awards and accolades. In 1987, during a 20th Anniversary celebration of the Summer of Love, the San Francisco County Fair gave McCloud a ribbon for his “unusual but timely” exhibition. National Public Radio gave McCloud exposure, and he subsequently won grants from the National Endowment for the Arts, and others. The following year, in 1988, McCloud hosted his Cure of Souls exhibit at the celebrated Psychedelic Solution gallery in New York City. No other individual has done more to promote the form than Mark McCloud, but his interest has spread virally and many artists have adopted Blotter Art as a legitimate medium.

However, LSD is illegal, therefore there is obviously no LSD present on these signed and numbered art prints.