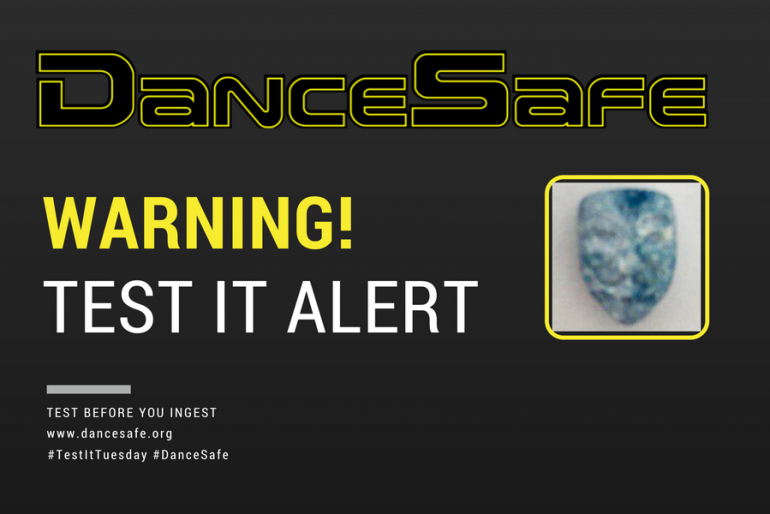 A blue Anonymous (Guy Fawkes) pill sold as MDMA at Kendal Calling, a festival in the UK, was tested onsite by The Loop and determined to contain 100 mg of pentylone and no MDMA. (Note: photo was blurry in submission to ecstasydata.org.)

Pentylone is a stimulant in the valerone family, that is being marketed as MDMA in pill, powder and crystal form. Its effects are similar to MDMA, but wear off much quicker, causing people to continue redosing. With all of the valerones, including pentylone and its analogues N-ethyl pentylone, a-PVP, MDPV, and pentedrone, “redosing seems to disproportionately extend the time to clear the body and this makes sleep very difficult or impossible for up to 36 hours without further medication,” states The Loop.

It is believed that these tablets were responsible for the numerous patients visiting the medics in the first 24 hours at Kendal Calling with symptoms of agitation, paranoia, and raised pulse and blood pressure that remained elevated even after being given intravenous sedatives. Luckily, The Loop was onsite testing drugs for festival attendees, and able to issue an event-wide alert about the tablets with the cooperation of all parties, including law enforcement. The alert issued by The Loop on social media was reposted by the festival management, police and other on-site agencies on their social media sites for maximum circulation. This occurred before the incident escalated, highlighting the importance of onsite drug checking at events.

Although the tablets were found in the UK, the black market’s reach is vast. Always test before you ingest to avoid adulterated or misrepresented substances. Purchase your DanceSafe reagent kit here.