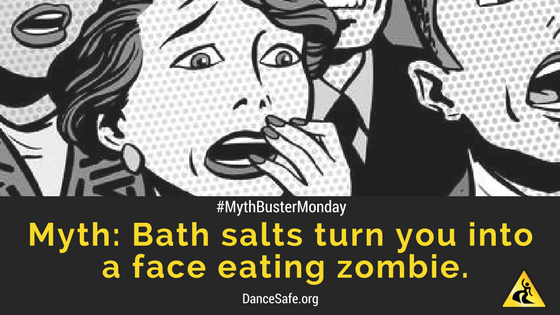 Bath Salts Will Not Turn You Into a Cannibal

On May 26, 2012, Rudy Eugene, a 31-year-old car wash employee, violently attacked Ronald Poppo, a 65-year-old houseless man he encountered on Miami’s McArthur Causeway. Eugene gnawed off most of his victim’s face in an 18-minute assault that ended after he was shot by a police officer.

Based on no evidence, and on one police officer’s speculation alone, news outlets all over the world caught wind of the bizarre incident, attributing Eugene’s savage violence to the use of “bath salts,” — a term used to describe synthetic cathinones like mephedrone (4-MMC), alpha-PVP, and MDPV. The media dubbed Eugene the “Causeway Cannibal,” and used security camera footage to illustrate the horrors wrought by a nonexistent “epidemic.” A month after the attack, toxicology reports found no trace of synthetic cathinones in Eugene’s body.

Two researchers from the University of Minnesota, neuroscientist Natashia Swalve and media scholar Ruth DeFoster, examined the strange incident in a scholarly article published years after the Miami incident. “The description of bath salts present in these broadcast media reports was very different from the scientific literature on the topic,” Swalve and DeFoster wrote, “and it does not appear that the media took this particular source of information into account in reporting.”

“The primary symptoms mentioned in the [news] transcripts included an increase in aggressive behavior, ‘super strength,’ and vivid hallucinations that could cause psychosis,” they continued. “This represents a marked difference from the increase in talkativeness, empathy, energy, and euphoria that characterize the clinical literature on the effects of bath salts.” While the most commonly reported effects of bath salts are those similar to entactogens like MDMA, the TV reports “focused overwhelmingly on psychosis, paranoia, cannibalism, and other extreme outlier behaviors.”

As this Forbes article aptly points out, “[j]ournalists’ general tendency to hype drug hazards is amplified by the sources on whom they typically rely: cops and clinicians whose work brings them into regular contact with a highly skewed sample of drug users—the ones who end up in jail or in the hospital.” By doing this, journalists are not only the sources of misinformation, but they fail to identify the underlying reasons why people engage in such radical and unusual behaviors.

“An early focus on bath salts, triggered by a series of speculative quotations from a single law enforcement source, fueled a month-long focus on bath salts use as the sole interpretive schema for the Miami attack, shutting out other possibilities from coverage,” states Swalve and DeFoster. “Most glaringly, discussion of mental health as it may intersect with and affect drug use was completely absent from coverage, an oversight that is particularly problematic because it is now clear that mental illness was likely a more appropriate (albeit less sensational) interpretive schema for this incident.”

As unfortunate as the event was, it serves as a shining example of the power the media has in spreading misinformation and hysteria about drugs, relying on inflammatory, fear-based appeals, focusing on outlying behaviors, and omitting more likely alternative explanatory cultural, environmental, and social factors. The news organizations whose work Swalve and DeFoster analyzed, “which are expected to be subject to high ethical standards, presented a portrait of this Miami attack—and of bath salts use in the United States—that was misdirected and disconnected from current clinical research on the use of the drug.”