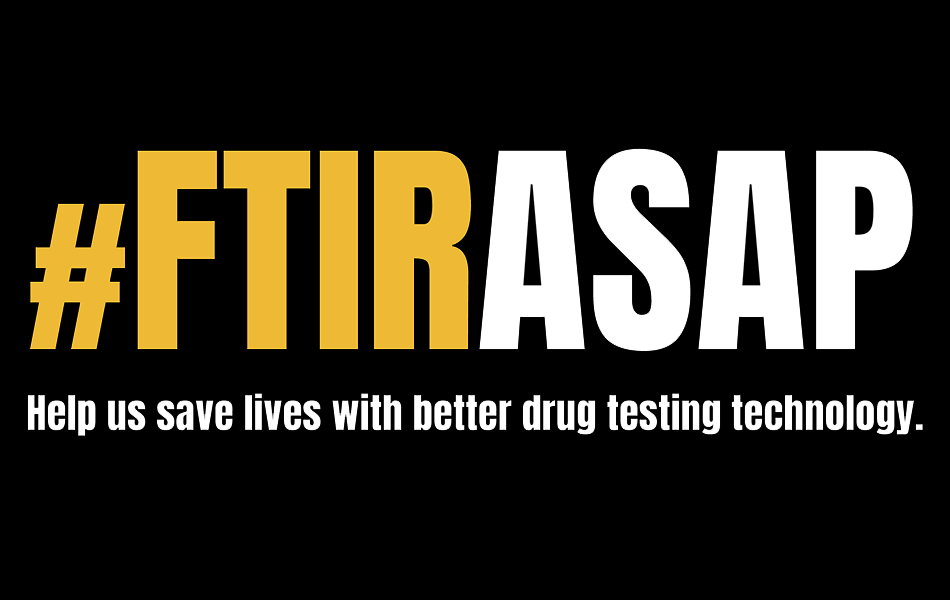 Today, we are launching our #FTIRASAP fundraising campaign in hopes to become the first-ever US-based nightlife harm reduction organization to offer confirmatory testing at events! This means we are raising money to implement our advanced testing technology program, which includes the purchase of two FTIR spectrometers, as further explained below. For the initial implementation of this program, we need $61,000. With prior targeted efforts, we’ve already raised $16,912.16 towards this goal! Every single dollar raised will go directly towards the implementation of this program. Will you help us reach our year-end goal by donating today?

When DanceSafe was founded, we primarily serviced the underground rave scene. Our services were rouge, provided in dark, dingy warehouses and nightclubs. At the time, we were utilizing the best drug testing technology for those settings–reagents. While we knew these had limitations, it was still better than offering no form of drug analysis to the PLUR communities of the late 90’s/early 2000’s. The primary concern for our founder, Emanuel Sferios, was adulterated MDMA, which was prevalent in the height of the ecstasy craze of this time.

Fast forward twenty years, and here we are still here doing the damn thing. Though now, we’re mainstream, upfront, and often considered complementary to medical teams at events. Today, our services are more important than ever due to the current crisis state of the recreational drug markets, which are flooded with new and emerging unknown substances, as well as misrepresented and adulterated drugs.

We are still utilizing reagents, but this technology is now often not fully equipped to analyze new drug trends–nightlife harm reduction organizations like the Loop in the UK, and ANKORS in Canada, are currently providing better, more accurate testing services to patrons of music festivals and live music events using Fourier Transform Infra-Red (FTIR) spectrometry. It’s time we get up-to-date, too.

Why do we need FTIR?

Currently, DanceSafe primarily uses colorimetric reagent testing for on-site drug analysis. This type of test is done by taking a small sample of the drug and dropping the reagent onto it. The liquid will change color when reacting with different chemicals to indicate the presence of certain substances.

Reagent testing is a presumptive test, and can only establish one of the following:

While reagent testing is an important and useful harm reduction tool, it is a presumptive identification test meaning there is always a chance for a false positive. For example, a new research chemical may trigger an expected reagent reaction for, say, MDMA, and therefore the reagents cannot positively identify a given sample. However, FTIR testing is a ‘confirmatory test’ which can provide positive identification of the substance in question. This is important because it allows for the confirmation of new and less often seen psychoactive substances, as well as rules out misidentifications which can rarely happen with reagent testing.

FTIR also allows for sophisticated data collection and analysis, which will allow DanceSafe to both monitor drug trends, and to partner with academics to research how drug checking can influence the behavior of people who use drugs. By engaging in more peer-review studies, our hope is that we can expand access to drug checking services both at music events, and eventually at ‘drop-in’ drug checking centers.

So what IS FTIR?

Fourier Transform Infra-Red (FTIR) Spectrometry is used to characterize the chemical bonding present in solids, liquids, and gases. A beam of infrared light is passed through a sample (or reflected off of a sample). Individual frequencies are absorbed and reflected by the sample’s unique interatomic bonds. For most organic compounds, a given infrared spectrum is a virtual fingerprint which may be used for positive identification. Extensive databases of FTIR spectra may be searched automatically to identify unknown samples.

FTIR is a significantly more discerning technology than the current DanceSafe reagent tests. The Scientific Working Group for the Analysis of Seized Drugs (SWGDRUG), a group of scientists whose goal is to recommend minimum standards for forensic examination of seized drugs and seek their international acceptance, considers reagent testing to be a ‘Category C’ test, their lowest ranking which can only identify a substance through ‘Selectivity through General or Class Information’, and FTIR to be a ‘Category A’ test, which allows you to determine a substance through ‘Selectivity through Structural Information’.

The ‘user-friendly’ software allowing for deployment of this technology was developed primarily for law enforcement, and has been co-opted by harm reduction activists for drug analysis relatively recently, with the first public use only taking place in the last five years in Europe and the UK. DanceSafe will be the first group in the United States to use FTIR for on-site drug analysis at music festivals and other events. Additionally, by confirming new psychoactive substances with our partner GC/MS lab at DrugsData.org we can contribute to the development of a more robust and useful drug checking community globally.

In sum, the demands of our community are changing, and we need your help to meet these changing demands. Drug culture is very much intertwined in the nightlife cultures we exist to serve, so it is our duty to provide more accurate drug checking services for everyone’s safety. If we can offer confirmatory testing in the nightlife setting, we can continue legitimizing harm reduction in the public’s eyes. We can offer scientifically-backed information to patrons about their drugs, thus giving them more complete information to use in making decisions about their health and wellbeing.

With the FTIR machines, we can also start collecting data so we can prove to the right people that drug checking is a legitimate public health tool. We will also be able to start noticing drug market trends, which will help better inform public health officials and other harm reduction organizations.

All of this is contributing to the legitimization and mainstreaming of harm reduction services, specifically in the nightlife setting. By using scientific machines, operated by trained DanceSafe technicians, we are making a statement that we are serious about the importance and legitimacy of our services. Drug checking saves lives, and with better technology, we can do a better job of preventing adverse medical incidents and even death. We’re here, and we’re not going anywhere. We’re only getting better.

We are doing this for you, because we love you. Help us acquire these life-saving drug analyzing machines by making a tax-deductible donation today!

DanceSafe is a 501(c)(3) public health organization promoting health and safety in the nightlife and electronic music community. We are known for bringing adulterant screening (a.k.a., “pill testing,” “drug checking”) to the rave and nightlife community in the U.S., and for distributing unbiased educational literature describing the effects and risks associated with the use of various drugs. We also started the only publicly accessible laboratory analysis program for ecstasy in North America, currently hosted and managed by Erowid at DrugsData.org. We neither condone nor condemn drug use. Rather, we provide a non-judgmental perspective to help support people who use drugs in making informed decisions about their health and safety.