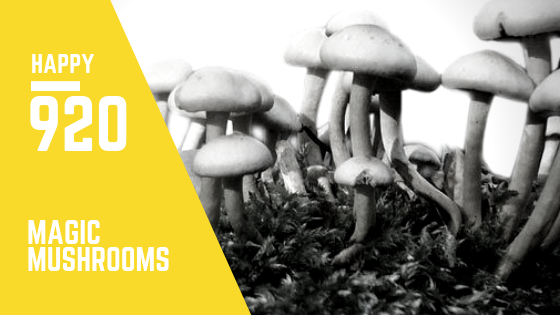 Today, 9/20, people all of the world are celebrating Psilocybin Awareness Day in honor of a strain of fungus referred to by the late Terence McKenna as “the starborn magic mushroom.” Stropharia cubensis (or psilocybe cubensis), and other species of similar origins, contain the compounds psilocybin and psilocin, which are active hallucinogenic agents that contain the basic indole structure characteristic of most hallucinogens found in nature (with the exception of mescaline, which is structurally similar to amphetamine).

The “magic mushroom” made its grand entrance into Western society in the 1950’s when American author, banker, and ethnomycologist Gordon Wasson and his wife Valentina discovered the powers of psilocybin-containing fungi high in the hills of the Oaxacan countryside in Southern Mexico. Guided by the now-infamous Mixeteco shaman, Maria Sabina, Wasson documented his experiences of the ceremonies in a Time Magazine article on June 10, 1957. (While Wasson’s Time article propelled the powers of the magic mushroom into the mainstream of the Western psychedelic culture, it is important to understand how his article, and subsequent visits from Westerners, exploited that particular region and harmed the reputation of Maria Sabina.) A yeah later, in 1958, Swiss chemist Albert Hofmann isolated psilocybin and smaller amounts of psilocin from P. mexicana.

In its relatively short history in the West, the magic mushroom has been a trailblazer of sorts, igniting the psychedelic renaissance of the 60’s and 70’s, and influencing great thinkers and leaders such as Ram Dass and Terence McKenna. Today, the mushroom is becoming the subject of many scientific studies, which are beginning to show the fungus’ ability to help with depression and end-of-life anxiety, as well as its promising effects of creating everlasting personality and characteristics improvements in humans.

People who have ingested psilocybin report having feelings of oneness with others and nature, and experience openness and deep compassion, among other things. The effects of the mushroom, which is overall a fairly low-risk substance (deaths from psilocybin are very rare), appeal to a broad range of individuals. While appealing, it is important, as with any drug, to engage in safety measures to reduce risks associated with use.

The amount of psilocybin or psilocin in magic mushrooms can vary greatly between strains as well as within the same strain, making it difficult to dose precisely. A typical dose of the popular strain psilocybe cubensis is about 2 dried grams. A threshold dose (one you can just barely feel) is considered around 1/4 dried gram, and 5 dried grams is considered a very strong (“heroic”) dose. Starting out with a smaller dose and waiting at least an hour to see how it feels is always a safer way to avoid having too strong a trip. On an empty stomach, the full effects should be felt within 30 minutes to an hour. On a full stomach, it could take much longer.

The greatest danger associated with taking magic mushrooms is accidentally ingesting poisonous mushrooms instead. There are about 200 species of edible, magic mushrooms, but only a handful of these are common. Learn how to identify them and always buy from a known, trusted source. Magic mushrooms may also precipitate the onset of schizophrenia in genetically predisposed individuals. Mushroom trips can sometimes be frightening, inducing extreme anxiety and panic. Although rare, some people relive the experience days, weeks or even years later in episodes known as “flashbacks.” Flashbacks are not unique to hallucinogenic drugs. They can result from any intense, psychological trauma as well. Magic mushrooms can impair judgment, so it is important to never drive while under the influence of magic mushrooms. Other factors to consider are the legality of magic mushrooms, which are considered a Schedule I substance under the Controlled Substances Act. Possession, cultivation, and distribution can result in long prison terms.

Some users experience nausea during the first hour after consuming magic mushrooms. Boiling the mushrooms for twenty minutes into a tea before consuming them can reduce the chances of becoming nauseous. As with all psychedelics, “set” and “setting” are important factors in determining whether someone has a positive or difficult experience. “Set” is the mental state a person brings to the experience—their thoughts, mood and expectations. “Setting” is the physical and social environment in which the drug is consumed. Being in a good mental state with trusted friends in a supportive environment before taking magic mushrooms reduces the risk of having a difficult experience.

Be self aware! If you choose to use magic mushrooms, knowing why is the best way to maximize the benefits and reduce the risks. Whether it’s for therapeutic, psychonautic or purely recreational purposes, knowing your intentions is necessary to assess whether or not they are being met.

Because of the perceived and proven medicinal qualities of the magic mushroom, citizens in various cities and states are beginning to push for decriminalization of psilocybin for medicinal use, such as Denver, Oregon, and California. These initial efforts appear similar to the first medical marijuana initiatives, and are something to keep a look out for as the “starborn magic mushroom” begins to gain traction and support in popular culture. The magic mushroom very well may be the next domino to fall in the concerted efforts across the globe to decriminalize drug use and promote cognitive liberty.