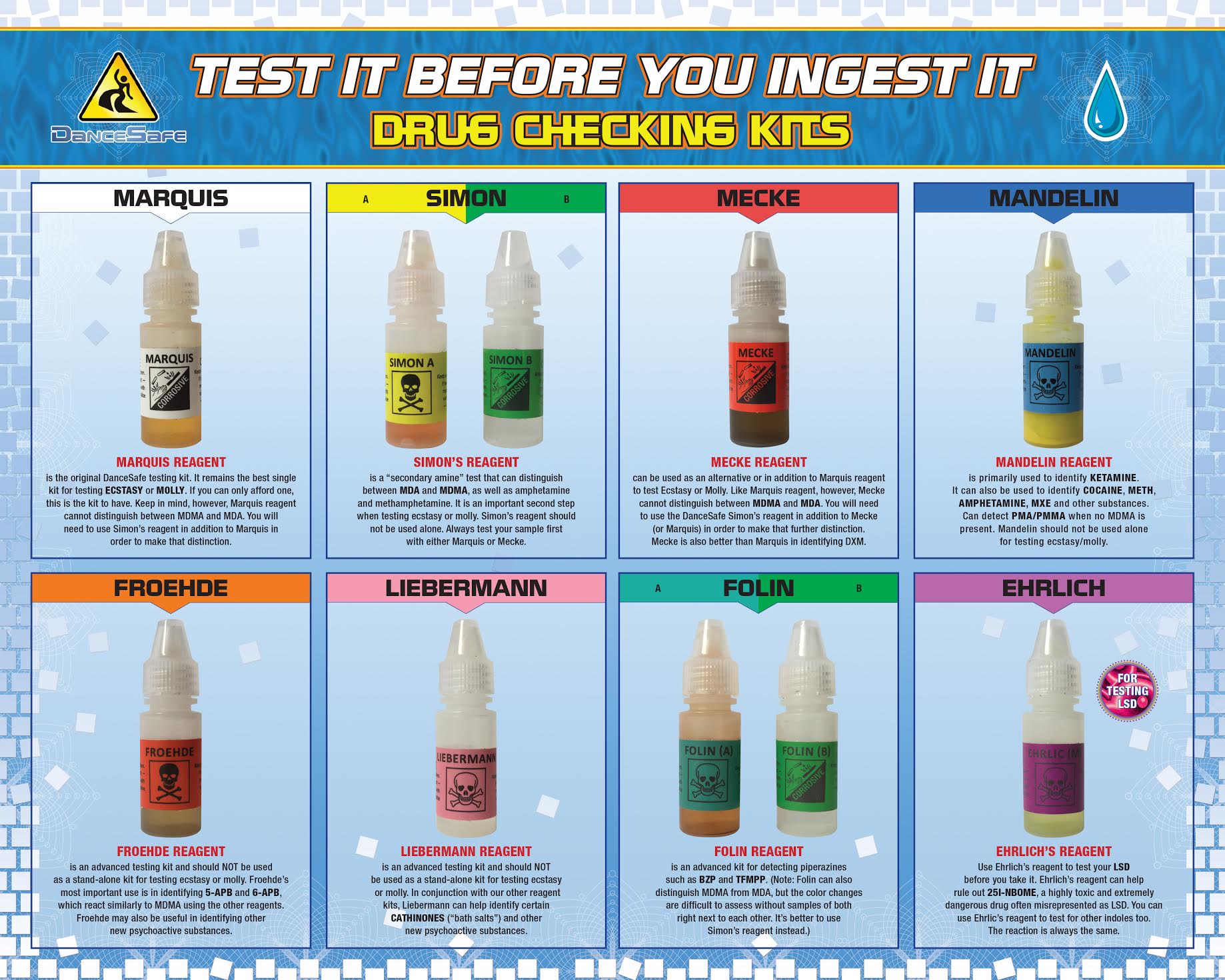 DanceSafe partnered with organizations across the globe to host the first annual International Day of Drug Checking on March 31, 2017, an initiative to raise awareness of the tools that exist to help mitigate risks for people who choose to use illicit drugs. Utilizing a “harm reduction” approach, public health organizations such as DanceSafe aim to provide health and safety information that is based on facts and that is presented in an unbiased manner.

Drug checking is a sound harm reduction approach and we believe more people should have the opportunity to test their drugs so they can make informed choices and reduce risk. Full chemical analysis of substances through GC/MS (Gas Chromatography/Mass Spectrometry), TLC (Thin Layer Chromatography), HP-TLC (High Performance Thin Layer Chromatrography), or infra-red methods is the best way to find out what is really in a substance. Seeking services of drug checking groups offers the best opportunity to connect with a professional who can offer expert harm reduction information. There is a 30 year history of drug checking in Europe with well-established test services in the Netherlands, Spain, Portugal, Switzerland, Germany and France. Testing on-site at festivals has also begun in the UK. Drug checking programs in the United States date back to the 1960s.

International Drug Checking Day also raised awareness about how people can check their drugs at home using reagent test kits. These can be bought online at DanceSafe.org, and can give a good indication of what a substance might be. While we recognize there are limitations to using reagents, we still believe this is a great way to reduce risk and an essential way to introduce people to finding out more about harm reduction.

It is DanceSafe’s stance that individuals should have a right to know what substances they are putting in their bodies, and thus, a right to access accurate, quantitative analysis of the drugs they might ingest. People should be appalled that their governments want to discourage citizens from choosing to use disapproved drugs because they fear toxic adulteration and dangerous substitutions.

Drug use is a global phenomenon. Many people around the world ingest some kind of substance on a daily basis, from caffeine to alcohol, cocaine to heroin. Drug use has become a moral and criminal issue with legislation and regulations generally following a global model of prohibition. Prohibition has led to networks of underground markets, with drugs being purchased on street corners, private homes, and through the internet.

These clandestine markets are unregulated, with no consistent oversight or product verification, which is known to cause increased and unnecessary risks. Quality control standards may be in place at some labs producing illicit drugs, but not others. But once these products are picked up by distribution networks, any certainty of identity or quality is lost, without independent drug checking. There are no standard dosage units, no list of ingredients and no information leaflet about possible side effects, interactions or ways to minimize risk from use included with these products. Similarly, online pharmacies operate in legal grey zones that raise the risks of unregulated medicines reaching the public.

We know that drugs that are sold in grey and black markets are sometimes substituted, mislabeled, or contaminated. Adulterants may be used to mimic the effects of more expensive drugs and while some may be fairly benign, others can produce toxic and fatal results. Global fatalities from drug use are rising, primarily because of the opioid epidemic, while the dynamic drugs market is becoming ever more fluid in response to legislative developments that attempt to limit the proliferation of New Psychoactive Substances (NPS). Avoidable fatalities from unregulated and under-regulated drug distribution are an unfortunate part of the world, one that we can work toward trying to mitigate through drug checking.

People who take drugs recreationally or who use pharmaceuticals from less reputable sources are at increased risk of harm through consumption of pills and powders with unexpected or unknown ingredients. While the use of any drug is not entirely risk-free, having an awareness of the chemicals contained can help people make informed choices about what they might put in their bodies, and help them to plan dosage and minimize the impact of use on their general wellbeing.

PARTNER ORGANIZATIONS AND SUPPORTERS INCLUDE:

Adapted from DrugCheckingDay.com and Erowid.