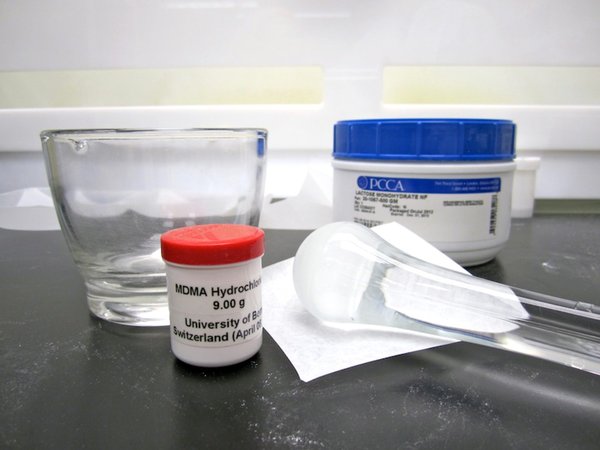 MDMA, the active ingredient in the illegal party drug Ecstasy, is currently being studied in a series of clinical trials to see if the drug’s ability to strip away defensiveness and increase trust can boost the effectiveness of psychotherapy.

It costs about $2,000 to buy an ounce of the illegal drug, the therapist said — enough for roughly 150 doses. She pays her longtime dealer in cash; he gives her a Ziploc bag of white powder.

Back home, she scoops the contents into clear capsules. She calls it “the medicine”; others know it as MDMA, the active ingredient in the party drug Ecstasy.

MDMA has been banned by the federal government since 1985 as a dangerous recreational drug with no medical value. But interest is rising in its potential to help people suffering from psychiatric or emotional problems.

A loose-knit underground community of psychologists, counselors and healers has been administering the drug to patients — an act that could cost them their careers.

“I do what is morally right,” said the therapist, who lives in Northern California and did not want to be identified. “If I have the tools to help, it is my responsibility to help.”

A series of clinical trials approved by federal drug authorities is now underway to see if the drug’s ability to strip away defensiveness and increase trust can boost the effectiveness of psychotherapy.

One of the key studies focuses on MDMA’s effect on military veterans suffering from post-traumatic stress disorder.

Farris Tuma, head of traumatic stress research at the National Institute of Mental Health, said he’s skeptical because there is no plausible theory so far about how the drug’s biochemical effects on the brain could improve therapy.

“They’re a long way between where they are now and this becoming a standard clinical practice,” he said.

A surge in Ecstasy-related deaths at raves has reinforced the compound’s destructive reputation.

But some of those who have given MDMA to patients are optimistic.

The therapist said she became a believer in the late 1980s after it helped her deal with her own trauma. She has since conducted roughly 1,500 sessions with patients, leading them on four-hour explorations of their feelings.

She uses only the purest MDMA — in contrast to street Ecstasy, which is typically contaminated — and none of her patients has ever experienced an adverse event, she said.

The therapist said she knows roughly 60 professionals in her region who use MDMA in their practices — and the number is growing.

“We are responsible therapists doing respectable work,” she said.

MDMA — or 3,4-methylenedioxy-N-methamphetamine — was first synthesized a century ago by chemists at Merck & Co. Inc., which patented it as a precursor to a blood-clotting medication.

Toxicity experiments secretly conducted for the U.S. Army and later declassified have fueled speculation that the military was interested in MDMA in the 1950s as a chemical weapon or truth serum.

Then in 1976, Alexander Shulgin, a former Dow Chemical Co. researcher who devoted his life to research and self-experimentation with psychedelic drugs, synthesized MDMA and tried it.

“I have never felt so great, or believed this to be possible,” he later wrote about the experience. “The cleanliness, clarity, and marvelous feeling of solid inner strength continued through the rest of the day, and evening, and into the next day.”

The following year he gave the drug to Oakland psychologist Leo Zeff, who was so impressed that he came out of retirement and began introducing it to therapists across the country.

By some estimates, as many as 4,000 therapists were using MDMA in their practices before federal authorities banned the drug.

“We lost a major tool that was really growing,” said Dr. Phil Wolfson, a San Francisco psychiatrist who used the drug in his practice when it was legal.

MDMA’s chemical mechanism remains unexplained beyond the broad effect of raising levels of serotonin and oxytocin — brain chemicals related to well-being and social bonding — and triggering the amygdala, a region of the brain involved in processing memory and emotion.

Therapists say MDMA can put patients in an emotional sweet spot that allows them to engage difficult feelings and memories.

Bob Walker, a 69-year-old Vietnam veteran from Chico, tried Ecstasy on his own after hearing it was being used to treat PTSD.

A few weeks after his first Ecstasy trip, he took it again and had his girlfriend drive him to a therapy appointment. His therapist had no experience with the drug but had agreed to the session.

Walker said the experience released him from haunting images of seeing a friend killed in a helicopter crash and watching a young Vietnamese boy die in a truck accident. “I didn’t lose any memory of what happened,” he said. “I lost the anxiety.”

The therapist, who did not want to be identified, said Walker seemed to open up. “This barrier that had been there was suddenly gone,” she said.

Despite worries that she was risking her career, she agreed to conduct two more three-hour sessions over the next several months.

“Once his soul was open, it didn’t fully close again,” she said. “Each time, I feel that he was closer to his truest nature.”

Tim Amoroso, a 24-year-old Army veteran, was tormented by memories of looking for body parts after a suicide bomber killed five U.S. soldiers in Afghanistan. He said antidepressants and anti-anxiety pills prescribed by doctors at the VA provided little relief.

Now a student at the University of New Hampshire, Amoroso bought Ecstasy at a music festival last summer and later took the drug with a friend watching over him.

“I feel like I found meaning again,” Amoroso said. “My life wasn’t as bad as I thought it was.”

The new research into MDMA’s therapeutic potential largely stems from the efforts of Rick Doblin, a former hippie who earned a doctorate in public policy at Harvard University to help his quest for drug legalization.

Doblin’s nonprofit Multidisciplinary Assn. for Psychedelic Studies, which runs on donations, has sponsored all research into clinical uses of MDMA. Doblin hopes the drug follows the same path as marijuana, whose approval for medical purposes led to broad public acceptance.

Ten of the 12 who received MDMA during two sessions improved so much that they no longer qualified for a PTSD diagnosis. Patients who received a placebo fared worse. A follow-up study published in 2012 found that, for the most part, the patients who improved continued to do well.

Mithoefer is now conducting a study looking at whether MDMA has a similar effect on veterans, firefighters and police officers afflicted with PTSD.

One participant is a 57-year-old retired Army major who has struggled with memories of a young soldier killed in an ambush in Iraq. The major hadn’t been able to talk much about it in earlier sessions without the drug.

“The kid, he’d shown me pictures of his young kids and wife and all that,” the soldier said in a videotaped therapy session. “To get to know someone and trust him, and now you know he’s dead — it’s tough.”

In subsequent testing, the severity of the major’s PTSD declined, the researchers said. The study’s full results on 24 subjects are expected late next year.

Among other studies, a trial set to begin at Harbor-UCLA Medical Center will test MDMA’s ability to combat social anxiety in high-functioning autistic adults. Bay Area researchers also are planning to conduct a study of whether MDMA can reduce anxiety in patients facing deadly illnesses.

Experts not involved in trials said they haven’t seen enough data to draw conclusions. They noted that in a Swiss study funded by Doblin’s group, the drug did not significantly reduce symptoms of PTSD.

With a budget of $2 million a year, Doblin’s group doesn’t have the money to pay for the wide-scale trials needed for scientific clarity and FDA approval. His hope is that the government will step in with funding.

Doblin has met with officials at the Pentagon and the Department of Veterans Affairs, but so far the government has kept its distance.

“Ecstasy is an illegal drug and [the] VA would not involve veterans in the use of such substances,” a spokesman said in an email.