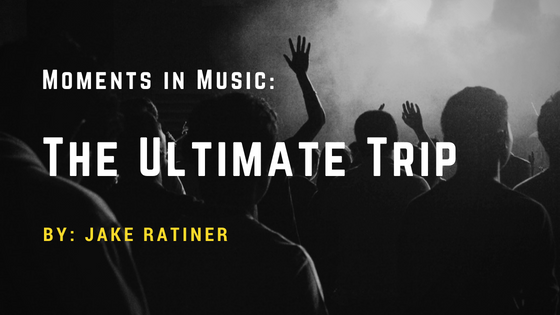 Reminder: It isn’t always about the drugs

It is rare to encounter someone who has not been impacted in some way, shape, or form by music. It is an aspect of culture that connects people to one another and the ethereal realm beyond the tangible. Music has the ability to inspire, to invoke change and promote unity and acceptance. It is no mistake that music finds its way into most religions, community gatherings and social settings. I have used music for meditation, medication and alteration. It has calmed me, healed me, and helped me grow through the stages of my life. Each song is attached to a memory, each melody paints a picture. For me, it transcends the physical world.

Another outlet for people to explore the world beyond the physical is drugs. Drug use has given people the opportunity to expand their minds and experience reality in an augmented state. I have seen things in new light and felt things more purely and deeply than I ever thought imaginable. Although my drug use may have led me to seek out substance use disorder treatment, I know that drug use can be a very positive experience for many people. I just believe that the inherent dangers of drug use should be well understood, so that we can be as safe as possible while exploring the landscapes of the mind.

The euphoria of music and drug use are similar experiences in the sense that they help people connect with themselves on a deeper and more intimate level. It is no coincidence that drug culture has permeated the music scene and the two go together like peanut butter and jelly. Drugs, sex, and rock and roll. The holy trinity of self-expression and exploration. In their quest to find the meaning of life, many have wandered beyond the point of no return. One toke over the line, they peered too far over the edge. While the inherent dangers of drug use exist, it is entirely possible to recreationally enjoy drugs while experiencing live music.

And why shouldn’t you?

After all, why not put the icing on the cake and elevate an already euphoric experience with a substance made to induce euphoria. The result should nine times out of ten be a prodigious home run, right? A spiritual encore, a religious reprise, a rocking revelation. The idea that one can attend an event that is not only rooted in uplifting and rejuvenating the soul but also caters to using substances that elevate such a feeling is all too appealing to those willing to push the limits of social consciousness. But as it is in life, sometimes things that sound too good to be true, are just that. Is there a pot of gold at the end of this sweet rainbow? Even if I told you there wasn’t, you’d still want to see for yourself, wouldn’t you?

The sun sets over an amphitheater built from the earth and shaped by the rain. The lights come up on a stage that stares back at ten thousand wide-eyed fans. It is a mecca for musicians and fans alike. I have been attending Red Rocks for years and the setting is nothing short of magic. Myself, and many in the crowd will ice this paradise cake with a hit of acid or a bump of molly. Many more will push the envelope and overdue it. In a quest to experience a show to its fullest capacity many lose sight of the real reason they are there.

I know for me, experiencing live music has always come with a joint behind my ear and a cold one in my hand. At first, it was for appearance, I wanted to look the part and I certainly didn’t want anyone next to me to be having more fun. After a while, it became an invitation to push the limits of what I could handle and how far I could go. This is not everyone’s experience and I certainly don’t suggest tumbling down the rabbit hole. Often times I would leave the show wondering where the time went. The experience was real, the music was true, but something got lost in translation.

The event had become nothing more than a host for an elaborate party, where excess and debauchery were the main event. I am not suggesting that drug use at concerts is wrong or takes away from the experience, rather that some cakes are better left un-iced. Imagine the perfect ice cream Sunday and a buffet of toppings at your disposal. There is no limit on the amount or variety you can choose from. By the end of topping your Sunday, its appeal is covered in gummy worms and milk duds. While none of the toppings are distasteful on their own, the amalgamation has left you with a heap of junk you no longer want to eat.

The point I’m trying to make here is that experiencing something as magical and existentially profound as an individual or group of individuals performing something that resonates with the masses, is often enough. To be present in the moment and have nothing but the music fueling a feeling of connectivity and euphoria is one of the most magical experiences one can have while listening to music.

I used to think that I was missing something if I wasn’t drinking or doing drugs at a show. It never occurred to me that the opposite was a possibility. There is a purity and authenticity that comes from seeing live music while not under the influence of drugs or alcohol. The distractions are eliminated and one is free to channel their energy and focus into the music. Give it a shot, offer to drive and soak up those cosmic rays in your natural state. Say no to that key bump or shot of Jager at set break and instead mingle through the crowd, people watching and absorbing your surroundings, then when the music comes back on be present and in the moment.

Shotgun a beer with the boys or take the candy that cutie just put on their tongue for you. But just remember why you’re there. Party on, dance safe, and lose yourself out there. But if you’re going to get lost, just make sure you get lost in the music.