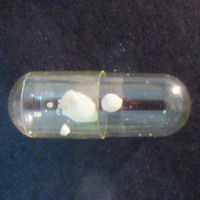 Just today from Utah a sample that was represented as MDA (Sass) was instead found to be AMB-FUBINACA, a potent synthetic cannabinoid. Related compounds sold in the black market as ‘molly’ and as smokable ‘legal highs’ have hospitalized and killed users both in the United States and overseas. Last June, a mass casualty event in Brooklyn where 18 were hospitalized and 33 treated was due to smoked plant matter that had been sprayed with AMB-FUBINACA. The potentially fatal dose for oral consumption of this substance is unknown.

If you do choose to consume, always #TestIt first. Purchase your DanceSafe drug checking kit here.