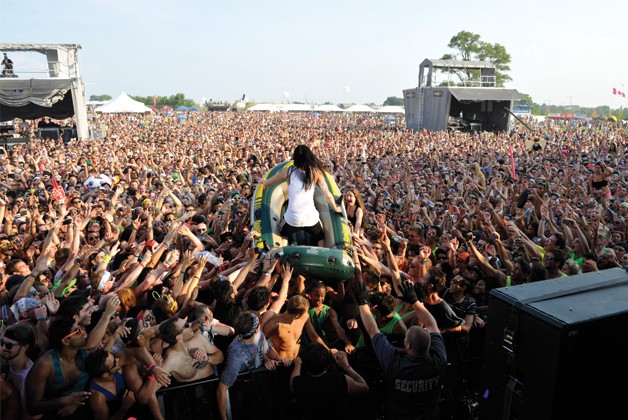 Does the summer music festival circuit have a drug problem?

While fewer and fewer big-name acts can fill stadiums on their own any more, the live music industry has seen a huge windfall from the exploding number of outdoor summer festivals drawing record crowds. But disturbingly large numbers of young people are being sent to hospital, and in some cases dying, in what appear to be drug-related incidents.

From the Veld Music Festival on August 2 and 3 in Downsview Park, 13 people were taken to hospital and two more died from what are believed to be drug-related issues.

Other fests, even mainstream country artists, are seeing similar distress at their shows (see sidebar).

After the deaths at Veld, eyebrows were raised when the case was assigned to Toronto homicide detectives. Police reached out to the public to turn in unused drugs for testing, leading many to wonder if tainted drugs were involved. City councillor Giorgio Mammoliti jumped all over the deaths, saying they were just another example of why the city needs to ban electronic dance music (EDM) events on city-owned property.

Detective Sergeant Peter Trimble says the deaths are not being treated as homicides. In fact, the only reason he’s working on the case is because of the scale of the situation. He says police are still interested in collecting and testing more unused drugs, but the results so far have turned up nothing to be especially concerned about.

“I want to make it very clear that we have found no evidence of any tainted or poisoned drugs at Veld,” Trimble says. “The message should be that these types of drugs are not safe regardless.”

What police have found in the drugs they’ve tested so far are MDMA, MDA and methylone. The first is obviously what partiers are hoping for when they purchase “Molly,” but the last two are cause for some concern, since they mimic some of the effects of MDMA but differ in toxicity and dosage response curves.

Nicholas Boyce, provincial director, Ontario HIV and Substance Use Training Program, has worked with harm reduction non-profit the TRIP! Project for 15 years and is also part of the Toronto-based Research Group on Drug Use.

He says the recent spate of problems has to do with the fact that “you have a newer generation of youth many of whom don’t know as much about what [drugs] they’re doing. But the other problem is the actual drugs out there. Some of these new chemicals are much more potent or have hallucinogenic properties and can increase your body temperature more.”

There’s a lot of incentive for dealers to sell other drugs as MDMA. A global crackdown on the precursors needed to manufacture it has driven suppliers to substitute alternative chemicals that are much less regulated and in some cases still legal – and potentially more lethal.

Those chemicals can be ordered from China by the kilo for a fraction of what actual MDMA costs and then resold as the real thing. However, it isn’t easy to get a sense of how big a problem these newer substances are. Even Toronto Emergency Medical Services isn’t sure to what extent the new generation of designer drugs may be playing a role in illness at festivals.

“The problem is we get there after,” admits EMS Commander Peter Rotolo. And “we can only go from what the patients or their friends tell us, which is why it was important to get hold of unused pills in this recent situation at Veld.”

But while mystery party chemicals are definitely a newer issue for organizers to cope with, Rotolo hasn’t seen a spike in drug-related problems, despite the sensational headlines.

When planning for a large event, EMS always assumes that a certain percentage of attendees may need to be transported to hospital for treatment, and Rotolo says those numbers have remained in the normal predicted range. Events that attract more young people might experience more problems, but so will events on hot days, and overall the numbers average out to what EMS generally expects.

But Rotolo is increasingly seeing newbie partiers flooding large-scale gatherings thanks to the EDM boom. “It’s more the social users who get themselves in an environment and don’t know how their body will react. You need to educate yourself on risks.”

Unfortunately, the larger events encountering the most problems are also the ones that most strongly resist harm reduction efforts. While they may spend huge amounts on hiring private medic teams, EMS, police and security, the more corporate events resist acknowledging any drug use on site and giving harm reduction groups like TRIP! high visibility.

“There are festivals that we do work with that are easier to deal with,” says TRIP! coordinator Lori Kufner.

While TRIP! did have a few volunteers at Veld, they were only there because of their relationship with one of the privately hired medic teams and were unable to set up an information booth.

“It’s definitely harder to have a meaningful presence at larger events. It’s almost meaningless for us to go with just few volunteers and hand out a few things. It’s much better if we can set up a booth.”

The other problems Kufner sees with large EDM festivals are the two major ways they differ from classic raves: they’re all day instead of all night, and the focus is on booze.

“Heatstroke, sunstroke and dehydration can definitely happen a lot easier if you’re out in the sun all day, and a lot of these events happen in a giant field where there’s no shade,” she says. “People aren’t drinking water; they’re drinking alcohol instead, and being encouraged to do so by the place where they’re partying. Mixing alcohol with anything is one of the riskiest things you can do.”

Adam Hobbs works with Emergency Medical Responders, volunteer medics who have worked parties around Toronto since 2001 after branching off from a larger volunteer first-aid group no longer willing to provide services to raves. He echoes Kufner’s concerns, but adds that in many ways things have improved greatly since he first started doing this kind of work.

“The scene has definitely cleaned up a lot. Venues used to shut off water so they could sell more bottled water, and we would have to confront them on that. We also had to work on preventing people from being ejected from events for seeking help. They used to just kick people out, even in the dead of winter. By educating venue owners, we’ve helped remove a lot of the sketchy factor.”

The EDM explosion has definitely complicated matters, but the most depressing thing is how familiar the proposed solutions are.

Many of these were made back in 2000 at the inquest into the death of Allan Ho, who died from ecstasy-related causes at a rave in an underground parking lot in 1999. Among the many unheeded recommendations, it proposed that harm reduction groups like TRIP! be supported by a surcharge on tickets sales for events. And yet little has changed in how the city approaches the problem. Every year TRIP! still has to fight for city funding after nearly 20 years of work in the scene.

“We should be revisiting the Allan Ho inquest,” Boyce says when I ask what could be done to improve the situation. “It feels like that whole inquest was a big waste of time and his death was in vain.”

Maybe things haven’t changed as much as the headlines make it seem, and that’s a problem, too. 