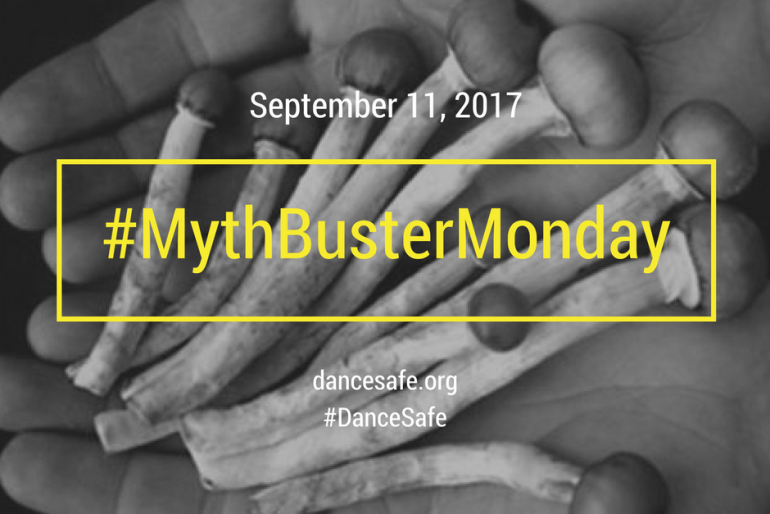 DanceSafe is here to debunk the myth that it’s possible to “never stop tripping” after taking mushrooms.

The first, most prevalent issue with this claim is the fact that all drugs are eventually excreted from your body after a certain period of time. To figure out when most drugs will be around 97-99% excreted from your system, look up the drug’s half-life and multiply it by five. In the case of psilocybin (the psychoactive ingredient in mushrooms that is broken down into psilocin in the body), its half-life is only around 1-2 hours, which means that it is no longer active in your body after only 5-8 hours or so. Psilocin is undetectable in urine tests after about a day.

In some cases, drugs make longer-term changes to the way that the body functions even after the drug itself is completely excreted. Examples of drugs that may have this “bounce-back” period could be pharmaceuticals like irreversible MAOIs, or releasing agents like MDMA, which uses up large quantities of serotonin in a short period of time. In these instances, there is a chemical in the body that was “cleaned up” (destroyed) that is then replenished over time. Even with these drugs, the substance itself is not still active in the system — the period of time after use is merely the body working back towards homeostasis (balance).

So what exactly is this claim referring to? The major circumstance that could lead someone to “never come down” does not have to do with the person somehow having an extremely long trip on psychedelics, but rather with the emergence of a mental health condition/symptom. This might mean that a person had a personal or family history of a mood or psychotic disorder that was brought out by a “stressor” – in this case, a psychedelic experience.

Those who claim that some people do not stop tripping after taking mushrooms might be getting confused with the fact that a mushroom experience may alter someone’s personality — but for the better. A John Hopkins University study shows that a single high dose of the hallucinogen psilocybin (the active ingredient in ‘magic mushrooms’) was enough to bring about a measurable personality change lasting at least a year in nearly 60 percent of the 51 participants in the study.

According to the study, the experience created lasting change in the part of the personality known as openness, “which includes traits related to imagination, aesthetics, feelings, abstract ideas and general broad-mindedness.” These changes “were larger in magnitude than changes typically observed in healthy adults over decades of life experiences,” which is significant because “[r]esearchers in the field say that after the age of 30, personality doesn’t usually change significantly.”

The results revealed that while other aspects of personality stayed the same, openness increased after a psilocybin experience. The effect was especially persistent for those who reported a “mystical” experience with their dose. These mystical experiences were marked by a sense of profound connectedness, along with feelings of joy, reverence and peace.

So, while the trip most certainly wears off (within 4-8 hours, depending on the dose and your metabolism), the effects may be everlasting — effects that are often very beneficial in the long run. Always do your research before spreading misinformation!