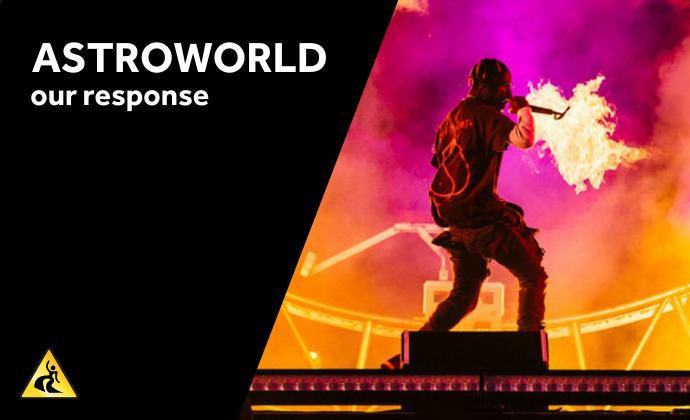 We’ve spent the last few days sifting through dozens (hundreds?) of firsthand accounts, videos, media reports, and scientific journals to produce what we hope can be a comprehensive guide on what happened at Astroworld. It has been extremely difficult. We’ve been overwhelmed with the amount of pain, betrayal, and trauma that has befallen so many members of our music community – and we have also been enraged, not only by the negligence that took place at this event, but by the flagrant misinformation spread in its wake.

Our synopses on the bigger issues with Astroworld (DanceSafe’s Evaluations) are below. This response serves as one part of a living document that will be updated with additional links as we publish additional expansions on these topics. We hope that you take the time to read all of them as they are released, as they contain crucial debunking and life-saving information.

Significant CW/TW: Some of the material discussed in this article will be graphic and upsetting. Content warning for body gore, death, and overdose.

DanceSafe’s verdict: While it is technically possible to dose someone by injecting them with a needle, it is extremely improbable that this actually took place even once, let alone with several people in a massive crowd.

DanceSafe’s verdict: The most likely cause of death for these individuals was crowd crushing, although autopsy reports will be the ultimate determinant.

DanceSafe’s verdict: LiveNation and its security contractors/vendors did not sufficiently prepare staff. Security staff were inadequately trained and medical staff were inadequately resourced. Some staff failed to act when alerted to problems in the crowd, and as far as we are aware there was no plan in place for crowd control or responding to crowd crushing.

We need to zoom out when we look at this tragedy. This is not the first time this year that we have released material in response to preventable deaths or distress at events; Elements Music Festival garnered similarly bad press (for different reasons) as a product of promoter negligence and lack of health and safety initiatives.

Beyond this, a myriad of large events have been held in unsafe or downright dangerous conditions in 2021 alone. Festivals have been held in 100 degree heat, where alcohol was served directly inside the entrance and water stations were a half mile walk away. Massive events have been thrown at the peak of the Delta surge without any sort of COVID precautions in place. Camping festivals have left ADA patrons stuck in shin-deep mud without assistance, and others waiting in line for shuttles for upwards of 10 hours.

The world has been throwing events for a long, long time, and gathering is an activity as old as humanity itself. We are heartbroken and exhausted every time we see yet another incident in which people’s lives or safety are threatened because of promoter negligence or community misconduct.

It’s okay to not be an expert on health and safety – not many people are. What is not okay is collecting the funds, time, and resources to throw an event without investing in hiring people who are experts to make sure that it happens right. Otherwise, it is no longer about the experience of the patrons: it’s about the brand. And boy, is it easy to underestimate just how many bases there are to cover when it comes to properly implementing health and safety.

We’ve said it before, and we will say it here: People who throw events create a container for attendees, and attendees become reliant on the resources and safety measures that organizers have put in place. Attendees are no longer capable of caring for themselves as they would normally be able to because there are certain restrictions in place that limit their behaviors, resources, and movement.

The phrase “health and safety” feels fluffy sometimes, but what it really alludes to is a vast practice of promoting fulfillment and protecting lives. People die at events without health and safety measures in place. Period. Everything else can wait until the patrons are safe – including the show itself.

Nine people have been reported dead so far, and counting. This does not include countless injuries. Their names: