Over 1,100 novel substances have been reported to the United Nations as of December 2021. This doesn’t include the >20,000 FDA-approved pharmaceuticals in the U.S., or the >4,900 supplement ingredients, that are also circulating on the illicit market. Countless combinations of illicit, pharmaceutical, supplementary, and inert substances are being sold in every state in America, and the numbers climb every day.

Drug checking, sometimes known as pill testing or adulterant screening, is a harm reduction service that helps people make more informed decisions about their drug use.

Drug checking technology ranges from simple at-home tests that can give you basic frontline information about your drugs (like the kits and test strips we sell) to entire labs that are dedicated to running advanced analysis on samples. These services assist medical professionals and public health agencies in identifying trends in illicit drug markets.

DanceSafe is the oldest and only nonprofit drug checking kit manufacturer in the United States. 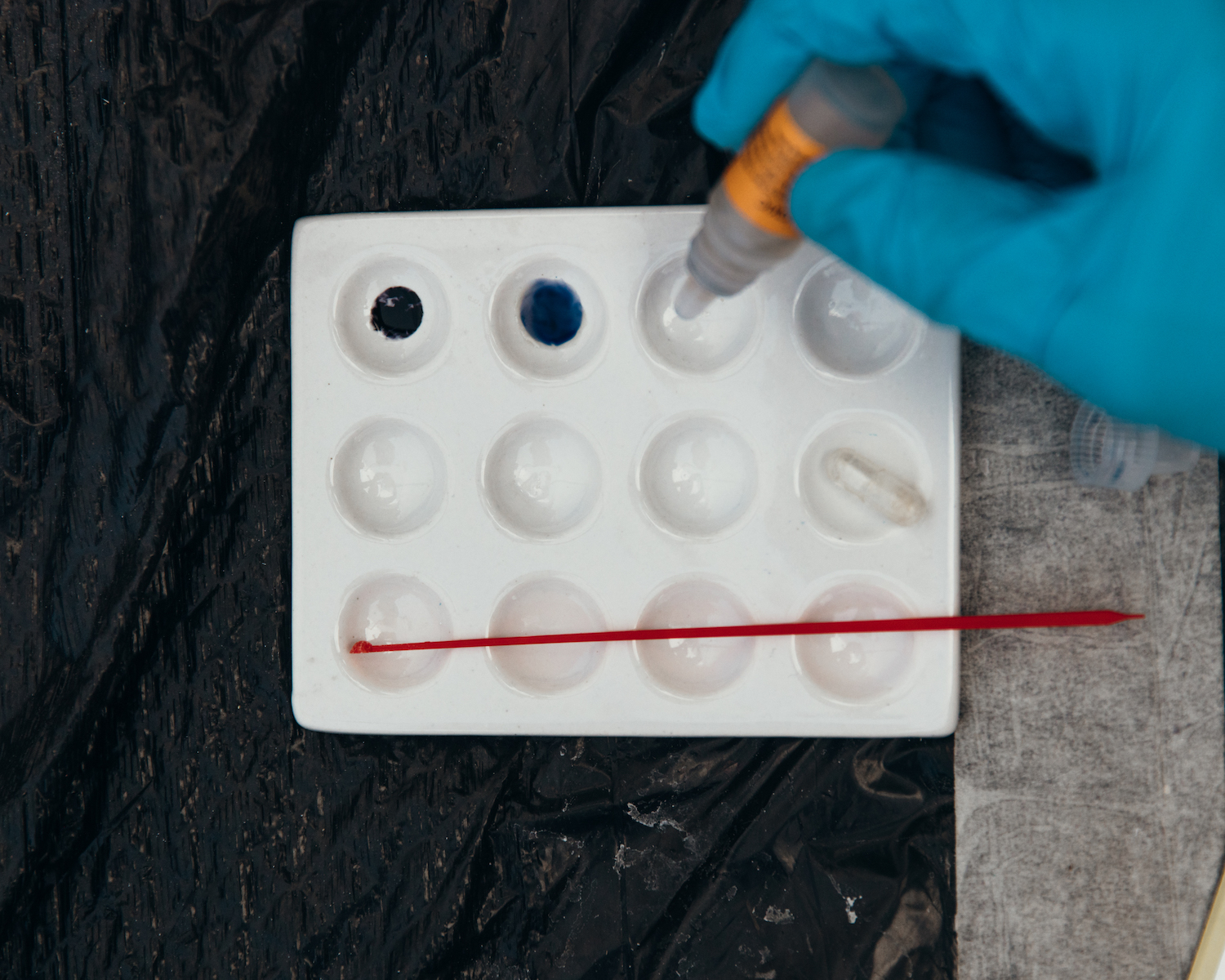 How does drug checking work?

There are multiple technologies available to check drugs, but only a few of them don’t require advanced equipment. The two most common and effective at-home drug checking tools are reagents and test strips (immunoassay strips).

Reagents and test strips have different purposes, strengths, and weaknesses. Neither can tell you exactly what is in your drugs.

Test strips are useful for telling you whether a specific type of drug is present in your sample at all.

Reagents are useful for telling you whether there are red flags with your sample (something didn’t test “as expected”).

How does reagent testing work?

Each “reagent” is a specific liquid chemical that reacts with a certain set of drugs. DanceSafe makes and sells nine different reagents, each of which has a unique name and a unique set of color reactions with various drugs.

You’ll almost always need to use more than one reagent at a time. Many reagents turn the same color with multiple drugs – Marquis, for example, turns black with MDMA and MDA. When using reagents, you should be asking yourself:

“Is this sample reacting as expected for [drug]? Are the color changes matching the DanceSafe chart?”

If the answer is no, you’ve just come across a red flag. This means that you’ve hit an unexpected snag in the test, and something isn’t right. The two biggest mistakes to be made in drug checking are:

My test didn’t have any red flags. Why doesn’t that mean that my drugs are good?

An easy example of this is the great MDMA shortage of 2009-2017. An enormous supply of MDMA and its synthesis materials (ingredients) was destroyed in 2008, leading to a global reduction in MDMA availability.

Some enterprising suppliers figured out that two easily-accessible substances, called PMMA and PMA, did not react in the presence of the Marquis reagent. MDMA’s black reaction on Marquis overshadowed the non-reactions of PMMA and PMA, making reagent tests appear to react as expected – no red flags.

Much of the MDMA supply in the early 2010s included pressed pills containing a little bit of MDMA alongside one or more other ingredients, some of which caused spades of fatal hyperthermia (overheating) like PMMA and PMA.

Additionally, many things can influence the final color reaction of reagents: precursors, adulterants, bulking agents, organic or inorganic impurities, even the color of the surface you’re testing on. Test with humility, and assume that you’re missing information.

Even the most seasoned drug checking experts should only use reagents to tell if something is obviously wrong with their sample – NEVER to confirm the contents or quality of the drug. Remember: there are at least 25,000 substances in circulation as of 2023.

No reagent can test for fentanyl. Do not trust any liquid chemical that’s marketed to be able to do so.

You can read all about this in our instructional pamphlet, and you can buy reagents here.

How does strip testing work?

Strip testing, also known as “immunoassay” testing, involves 1) diluting your drugs in a certain amount of water and 2) dipping a test strip into the mixture to get a positive or negative result for the presence of a particular kind of drug. This test is very useful for determining if one specific type drug (like fentanyl and its analogs) is in your sample at all.

Keep in mind: Each type of strip will be able to detect the presence of a certain set of drugs. Amphetamine test strips, for example, may produce a positive if they detect amphetamine, methamphetamine, MDMA, 4-fluoroamphetamine, and so on. Only a lab can tell you exactly what’s in your sample, but test strips are very helpful for determining whether:

Test strips are actually urine strips that have been repurposed for use in drug checking. This is an important concept to understand: you can read more about it here.

Since immunoassay strips are very sensitive, it is extremely important to use the correct ratio of water to substance to avoid getting a false positive or negative.

You can read more about our fentanyl test strips in our instructional pamphlet, and you can buy test strips here.

Can I test my mushrooms or cannabis?

Organic material (like plant matter and fungi) is difficult, if not impossible, to test with at-home tools. We rarely advise trying to test organic materials except in extreme outlier situations, where we offer assistance on a case-by-case basis.

As of late 2022 we are only aware of one case of fentanyl contamination in cannabis that has actually been substantiated by a lab, while all other claims are either unverified or have been debunked. If the situation changes we’ll update our advisory accordingly. We are not aware of any cases of fentanyl contamination in mushrooms that we haven’t personally disproven.

Be aware that many cannabis-related products sold in head shops and smoke shops may have poor quality control, and sometimes contain pesticides, heavy metals, or no cannabinoids at all.

Medical emergencies from synthetic cannabinoids (which you may know as “Spice” or “K2”) are frequently misattributed to fentanyl. Buy from licensed dispensaries when possible, and always look for quality control information on the packaging of any weed that’s bought from any non-dispensary source.

Note: Testing magic mushrooms isn’t useful, but you should examine the shrooms to make sure they’re not a different (potentially poisonous) species altogether. Websites like the Shroomery can help with identification.

What is the #TestIt program?

#TestIt is an awareness program that highlights the importance of drug checking and illuminates illicit drug market trends across the U.S. #TestIt alerts are periodically released about adulterated drugs, serving as an early warning system for novel substances OR a caution about a high-risk regional trend.

You can see recent #TestIt Alerts here. For more in-depth information about novel psychoactive substances detected in the United States, you can sign up for the NPS Discovery newsletter.

What do these laws mean for me?

Again: In the last 24 years of shipping reagents and test strips across the country, we are not aware of any criminal cases where someone has been charged for possession of just a drug checking kit. There have been some cases where people  had extra paraphernalia charges tacked on to their case if they were arrested for other drug charges, and happened to also be in possession of drug checking materials.

If you are concerned, you can review the drug checking laws in your state here. More information about shipping and policies is available here.

If you or your organization have any further questions, please contact us directly at hannah@dancesafe.org. 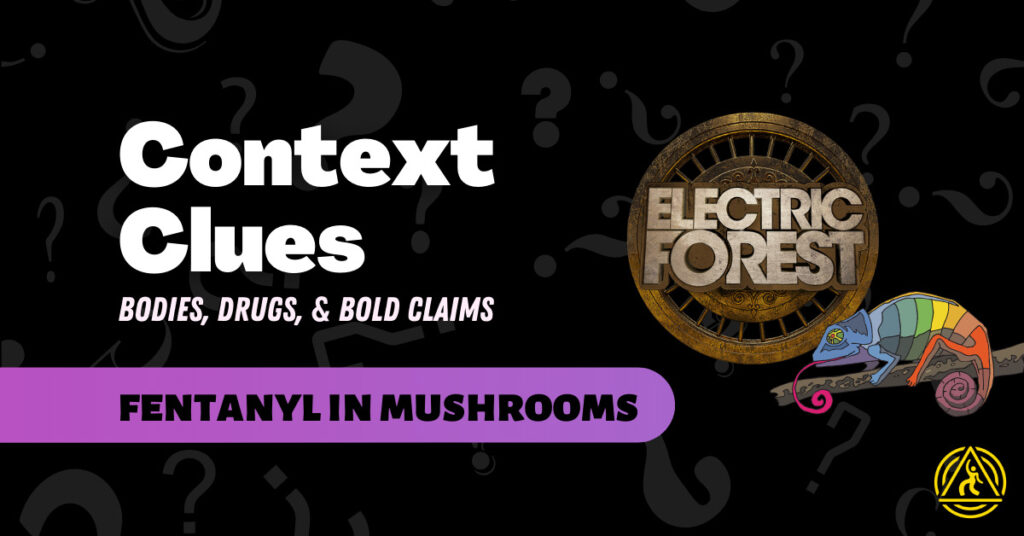 An emergency text went out at Electric Forest 2022 claiming that fentanyl-laced mushrooms were causing ODs. We break down different ways to read articles like this to determine the validity of their claims, while pointing out red flags that indicate where information might be getting inflated. 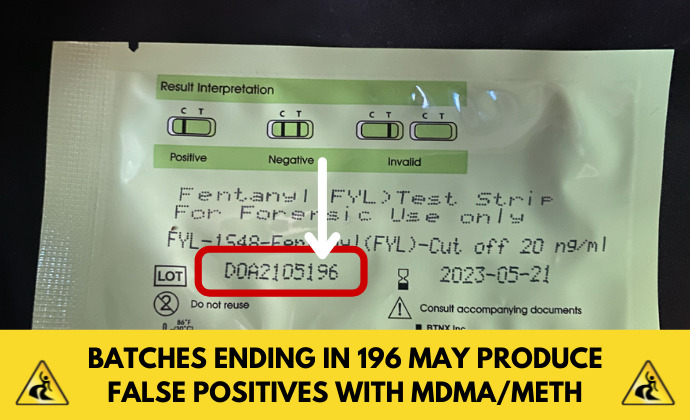 DanceSafe has recently discovered that the BTNX fentanyl strip batch ending in 196 produces false positives with MDMA and meth unless diluted more. 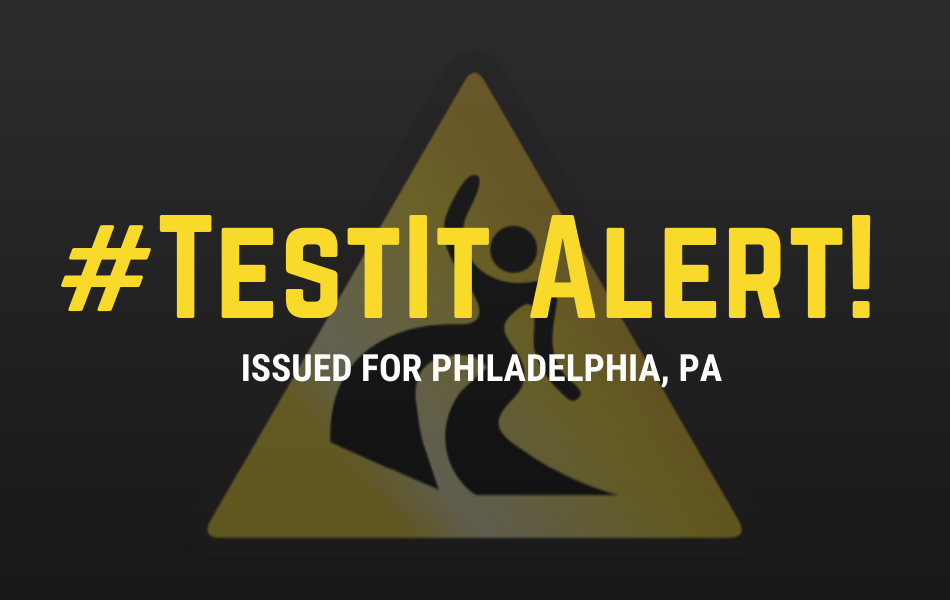 A round light blue pill with “A” over “215” separated by a break line was sold in Philadelphia, PA as oxycodone A 215; contains fentanyl, analogues, gabapentin.