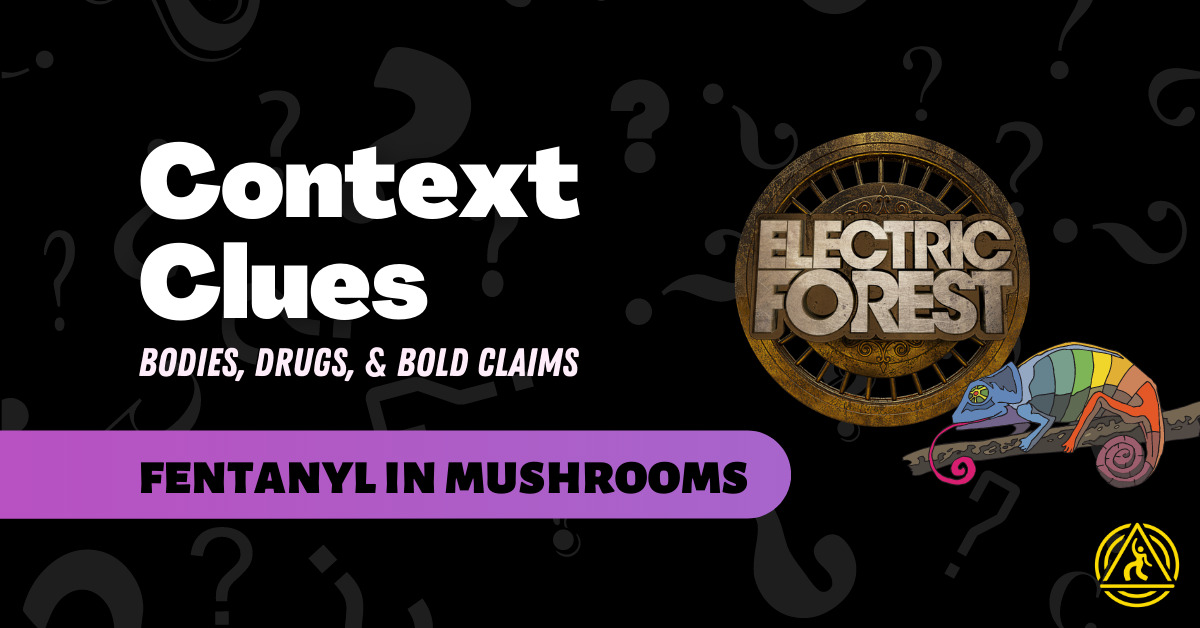 This past weekend at Electric Forest, panic broke out as thousands of people received the following text alert:

“STOP TAKING ANY MUSHROOMS. SEVERAL PEOPLE HAVE OVERDOSED FROM FENTANYL ON MUSHROOMS.

ODs at the Hangar and Tripolee. Confirmed by medical staff. Text your friends, tell the people around you.”

This news has since spread like wildfire, reaching the eyes of millions of people. Questions have started pouring in: “Is there really fentanyl in mushrooms? How do I test them? Was it on purpose?

The short answer: No. We don’t think it’s true.

The long answer is long. Too long for us to squeeze into the span of a single article today. Instead we’ll provide a simple algorithm for how we evaluate whether a claim made about drugs – especially when it comes to fentanyl adulteration – falls under each of the following categories:

(Note: These are not standardized terms. They’ve been written for the purpose of this article to convey how we encourage readers to review information as peer educators.)

Confirmed true (“confirmatory”): The claim is properly verified and can be quoted as factual.

Contextually likely (“suggestive”): The claim makes sense given the evidence provided, but it still hasn’t actually been proven.

Contextually unlikely (“assumptive”): The claim doesn’t really add up, includes conflicting information, and/or comes from a game of telephone wherein the original source(s) of the claim are not directly presenting their findings.

Confirmed false (“debunked”): The claim has been directly disproven and is not factual.

On the basis of this grading scale, we deem the Electric Forest situation contextually unlikely for the following reasons:

The following are red flags indicating that the certainty of information is being inflated:

It’s okay to not have all the information that’s needed to make a confirmatory statement about a given situation. It’s okay to announce that the cause of an emergency isn’t clear yet, and advise caution in the meantime (as long as there’s follow-up afterwards). It is not okay, however, to advertise a confirmatory statement when it is only contextually likely, or – more problematically – contextually unlikely.

Disseminating contextually unlikely information as though it’s confirmed true is the reason why we’re still going around disproving claims about fentanyl-laced weed. The spread of contextually unlikely claims distracts educational efforts around things that are actually happening and threatening people’s lives on a daily basis. This is not to say that contextually unlikely things are impossible, or couldn’t start happening in the future, but they definitely should not be prioritized.

Way too many people are dying from fentanyl-contaminated cocaine – and way too few people are testing their drugs – for the world to suddenly shift its attention to the one-in-a-million, contextually unlikely scenario of fentanyl-contaminated mushrooms. Once the majority of the world has basic, foundational drug education available, we can move on to discussing the outliers. Until then, these kinds of lengthy conversations about contextually unlikely scenarios might actually be costing lives, especially when major media outlets use them as fuel for anti-drug rhetoric.