Crack Cocaine and Powder Cocaine are the Same Drug | DanceSafe 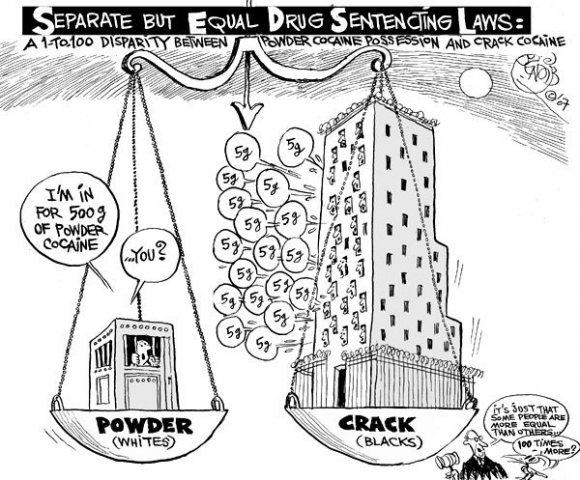 For this week’s #MythBusterMonday, DanceSafe debunks the myth that crack cocaine is a different drug than powder cocaine.

During the doubled-down drug hysteria of the Reagan era, Republicans and Democrats joined forces to implement mandatory minimum sentencing laws. In 1986, the Anti-Drug Abuse Act was passed by Congress, mandating a minimum sentence of five years for a person convicted of trafficking five grams of crack cocaine. However, for someone to receive the same sentence for selling powder cocaine, possession of five hundred grams of cocaine was needed–one hundred times the amount of crack cocaine.

“To punish crack offenses more harshly than powder offenses is like punishing more harshly those who are caught smoking marijuana than those caught eating marijuana-laced brownies,” states Dr. Hart. “From a scientific perspective, any sentencing disparity for crack and powder cocaine makes no sense.” There are no pharmacological differences between crack and powder cocaine to justify such differential treatment under the law.

Not only is the law scientifically unsound, it also disproportionately targets African American populations–85% of those convicted of crack cocaine offenses are black, even though the majority of crack cocaine users are white. To account for this disparity, President Obama signed the Fair Sentencing Act into law, reducing the sentencing disparity between crack cocaine and powder cocaine from 100:1 to 18:1. This disproportionality, while lessened, still does not reflect the fact that the substances are the same. Studies like those conducted by Dr. Hart are necessary and should be reflected in the laws. It is time public policy reflect scientific fact.