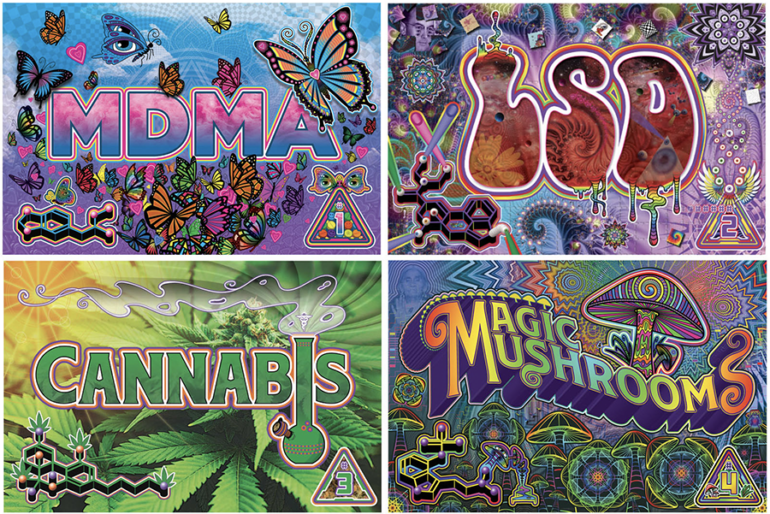 We are proud to announce the release of five, newly redesigned drug information cards! Our MDMA, LSD, Mushrooms, Cannabis and Alcohol cards have been updated with more attractive artwork. The new cards are available right now, along with poster versions of all of them except the alcohol card.

This is the first time we’ve updated the artwork on our drug info cards since we first launched the series in 1999. Both the original designs and the new ones were created by Oakland artist and graphic designer, Jason Justice, with direction from DanceSafe founder, Emanuel Sferios.

As Sferios explains, “The idea for the artwork back in 1999 was to capture, as much as possible, the subjective effect or inner feeling of the drug in question, without judgment or stigma. We wanted young people to resonate with the art. That way they would actually read the health and safety information on the back.”

The new artwork builds on the original concept while adding some culture and history as well. But most significantly, the new designs are more beautiful and much more detailed than the original versions.

Our drug card series has been a tremendous success. Over the last 20 years we have printed and distributed over four million of them, and they continue to be purchased by schools, health centers, harm reduction agencies and drug consumers alike. It is our hope that our new cards, along with our posters, will bring our health and safety message to a broader segment of today’s youth and festival culture.

Take note. These are just the first five cards. We will be releasing new versions of all the other drug cards too, as well as creating a few new ones, before the end of the year.