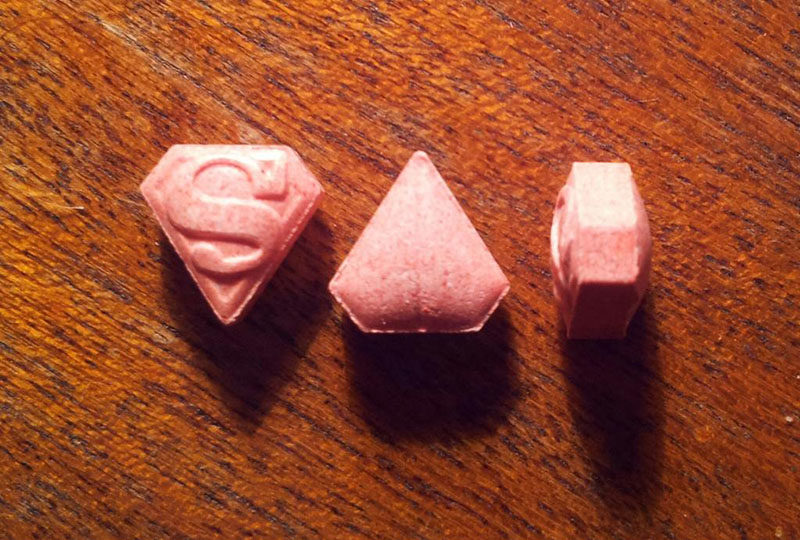 DanceSafe comment: Please note that our Mandelin reagent is capable of positively identifying PMA and PMMA in Ecstasy and Molly samples, but the Mandelin reagent must be used in conjunction with Marquis and Mecke reagents. A green-to-brown color reaction with Mandelin combined with no color change with Mecke and Marquis is a strong indication of the presence of PMA or PMMA in a pill or tablet.

However, there are limitations to reagent testing. The most important one to remember is that reagents are not capable of detecting most drug combinations. For example, if there was PMA/PMMA plus MDMA together in the same tablet, the black color change with Mandelin reagent for MDMA would mask the green-to-brown reaction for PMA/PMMA. However, the Superman tablets that have recently killed four people in the UK contained only PMMA. Thus, if these pills were checked using a complete set of reagent kits prior to consumption, these lives may have been saved.

The first thing to know is: this has happened before.  But is our response any better?

On the first day of 2015, BBC broke a story about three deaths related to “ecstasy from a dangerous batch.”  Within a couple of days after another death, police found 400 of the pink Superman pills responsible for the deaths and charged two people in connection with the supply.

It was discovered that the dangerous pills contained PMMA – Para-MethoxyMethAmphetamine.  What can be commended in this circumstance is that police released images of the pills and encouraged people to turn them in.  Media outlets, including BBC, but also Mixmag, VICE and others covering the electronic music community put out their own alerts to warn people about the dangerous pills.

I was looking some of them up for this blog post when I stumbled across something that made me do a double-take: an alert from January of 2014 for pink Superman pills that looked exactly the same.  These contained PMA and led to several deaths in Scotland.

No. Twelve months ago the same thing happened.  And periodically going back quite a while, a batch of pills or powder will come out that is adulterated with PMMA or PMA and people will die.

Why does this keep happening?  David Nutt, Max Daly or Mike Power can tell you.  But it all boils down to the same reason: while MDMA (and its precursor chemicals) remain illegal and hard to access, imitator drugs – even dangerous ones – will keep coming along to satisfy the market demand.

Maybe our society isn’t ready to address the fact that many people around the world have positive experiences using MDMA and that the “market demand” isn’t going away anytime soon.  Maybe, as drug policy reform organization Transform suggests, it’s time to consider regulation.

Until then, there’s really only one response that may do something to prevent, or at least lessen, the number of deaths from drug use: widespread, well-coordinated drug checking services.

“Drug checking” refers to testing your substances to determine if they are what you were told they were supposed to be.  It can mean something as simple as a liquid reagent dropper test you can do yourself, all the way up to GC / MS (gas chromatography / mass spectrometry) that can only be done in a lab and is much more accurate.

“Drug checking” is a term borrowed from the Europeans who’ve already been doing it for quite a while now, and meant to replace “drug testing” which more commonly refers to people looking at your urine to see if you’ve ingested any drugs, or “pill testing” which is less accurate to use now that many drugs (including MDMA) do not come in pill form.

Out of all the harm reduction interventions out there – access to water, drug education, chill spaces, to name a few – drug checking is the scariest for people to contemplate. But it’s also the one that’s going to make the most impact when it comes to people making smarter, more informed choices about their drug use.

It’s also the one with the biggest chance of saving people’s lives.

In January 2016, I really don’t want to see another story about PMA / PMMA deaths.

Stefanie Jones is the nightlife community engagement manager for the Drug Policy Alliance.