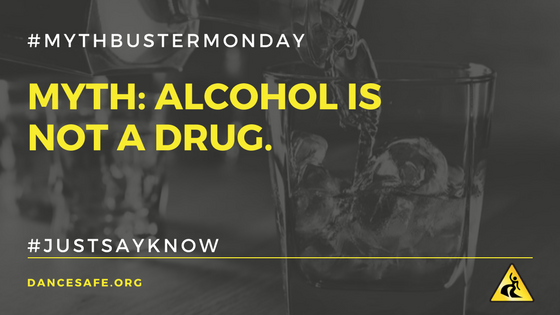 Remember when we debunked the myth that caffeine was indeed a drug? Well, it’s time now to do the same for alcohol. Today, we bring to you #MythBusterMonday in all its might to dismantle the dichotomy between “drugs and alcohol.” As DanceSafe’s Kristin Karas is always so apt to point out, it should be more accurately stated as  “alcohol and other drugs.”

Alcohol, also known by its chemical name ethanol, is a psychoactive drug that is the active ingredient in beverages like beer, wine, and distilled spirits. It is one of the oldest and most common recreational substances, as some evidence suggests that human usage dates back as far as 9,000 years ago.

Alcohol is a depressant, meaning it targets a chemical called GABA, the primary inhibitory neurotransmitter within the brain. According to this article in Psychology Today, drinking “profoundly alters mood, arousal, behavior, and neuropsychological functioning.” Studies have found that the specific effects depend not just on how much someone drinks, but also on the rise and fall of their blood alcohol content (BAC). As BAC rises, “drinkers report increases in elation, excitement and extroversion, with simultaneous decreases in fatigue, restlessness, depression and tension. Conversely, a falling BAC corresponds to a decrease in vigor and an increase in fatigue, relaxation, confusion, and depression.”

Alcohol is regulated differently than other drugs. Rather than being grouped in a Schedule under the federal Controlled Substances Act like most other drugs, each state has the licensing authority to regulate alcohol as it sees fit. Alcohol is so widely and socially accepted, it is often forgotten how dangerous it is compared to other more stigmatized drugs like cannabis (yes, cannabis is too a drug). It is estimated that 88,000 people die from alcohol-related causes every year, making alcohol the third leading preventable cause of death in the United States.

Maintaining a distinction between alcohol and drugs only perpetuates the stigma associated with drugs and drug use. Those who condemn drug use, but drink alcohol, are being hypocritical. The only difference is the labeling of the substance, and the social acceptance that is attached to such label. Alcohol is even used in religious settings during church when the red wine is passed around symbolizing the blood of Jesus Christ.

Advertisements for alcohol show young people in social settings, consuming alcohol while having a grand old time. When people get together in social gatherings, alcohol is almost always a guarantee to be present. Pizza and beer, cheese and wine, a stiff cocktail with the boss. It’s widely associated with loosening up in social situations, and is a staple at all types of parties.

While the alcohol industry loves maintaining the distinction between drugs and alcohol and its free ride on the stigma-less train, DanceSafe does not. Nor do we love that people who choose to use drugs are frowned upon by members of our society who themselves drink, perhaps nightly to “unwind.” So, as we sit down and crack a cold one, let’s remember at whose expense. An effort should be made to humanize drugs and drug use, rather than continuing to stigmatize. A good start is to recognize that alcohol is a drug.